Plagiarism is defined as ‘literary threat’ (The Oxford Dictionary, 2011). The Merriam-Webster Dictionary (2011) describes plagiarizing as ‘stea[ing] and pass[ing] off (the ideas or words of another) as one's own: us[ing[ (another's production) without crediting the source’.

Stealing the ideas of another person can have severe consequences, especially when the literary theft is committed in either the bachelor thesis, master thesis or even PHD thesis. In extreme cases, you have to go to court and you will be deprived of your title. This, in turn, can lead to the loss of your job and it might be hard to find a new employment as the literary theft might appear in your criminal record. 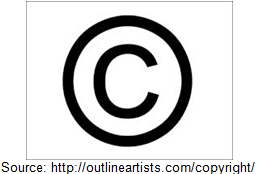 Another concept related to preserving the originality of one’s work is the copyright. The Oxford Dictionary (2011) specify a copyright as ‘the exclusive and assignable legal right, given to the originator for a fixed number of years, to print, publish, perform, film, or record literary, artistic, or musical material’. Once you have published a photo, a book or a magazine you automatically possess a copyright. This means that anyone who wants to use your work has to credit the source. If this is not done (correctly) you own the right of litigation. Most countries nowadays have copyright laws.

In order to maintain flexibility, the author can distribute Creative Common (CC) licenses and allow other people to use his work and even build upon it. People must, however, comply with the conditions set out in the license.

A lot of plagiarism is done unintentionally. Therefore, you should be very careful when writing an essay that has to be submitted and/or even published.
Plagiarism.org identifies several types of plagiarism starting with the most severe type:

3)    Examples of Plagiarism and Copyright Infringements

Source text:
‘From a class perspective this put them [highwaymen] in an ambivalent position. In aspiring to that proud, if temporary, status of ‘Gentleman of the Road’, they did not question the inegalitarian hierarchy of their society. Yet their boldness of act and deed, in putting them outside the law as rebellious fugitives, revivified the ‘animal spirits’ of capitalism and became an essential part of the oppositional culture of working-class London, a serious obstacle to the formation of a tractable, obedient labour force. Therefore, it was not enough to hang them – the values they espoused or represented had to be challenged.’

Plagiarised texts:
A) Although they did not question the inegalitarian hierarchy of their society, highwaymen became an essential part of the oppositional culture of working-class London, posing a serious threat to the formation of a biddable labour force. (This is a patchwork of phrases copied verbatim from the source, with just a few words changed here and there. There is no reference to the original author and no indication that these words are not the writer’s own.)

B) Although they did not question the inegalitarian hierarchy of their society, highwaymen exercised a powerful attraction for the working classes. Some historians believe that this hindered the development of a submissive workforce. (This is a mixture of verbatim copying and acceptable paraphrase. Although only one phrase has been copied from the source, this would still count as plagiarism. The idea expressed in the first sentence has not been attributed at all, and the reference to ‘some historians’ in the second is insufficient. The writer should use clear referencing to acknowledge all ideas taken from other people’s work.)

C) Although they did not question the inegalitarian hierarchy of their society, highwaymen ‘became an essential part of the oppositional culture of working-class London [and] a serious obstacle to the formation of a tractable, obedient labour force’.1 (This contains a mixture of attributed and unattributed quotation, which suggests to the reader that the first line is original to this writer. All quoted material must be enclosed in quotation marks and adequately referenced.)

D) Highwaymen’s bold deeds ‘revivified the “animal spirits” of capitalism’ and made them an essential part of the oppositional culture of working-class London.1 Peter Linebaugh argues that they posed a major obstacle to the formation of an obedient labour force. (Although the most striking phrase has been placed within quotation marks and correctly referenced, and the original author is referred to in the text, there has been a great deal of unacknowledged borrowing. This should have been put into the writer’s own words instead.)

E) By aspiring to the title of ‘Gentleman of the Road’, highwaymen did not challenge the unfair taxonomy of their society. Yet their daring exploits made them into outlaws and inspired the antagonistic culture of labouring London, forming a grave impediment to the development of a submissive workforce. Ultimately, hanging them was insufficient – the ideals they personified had to be discredited.1 (This may seem acceptable on a superficial level, but by imitating exactly the structure of the original passage and using synonyms for almost every word, the writer has paraphrased too closely. The reference to the original author does not make it clear how extensive the borrowing has been. Instead, the writer should try to express the argument in his or her own words, rather than relying on a ‘translation’ of the original.)

A) Peter Linebaugh argues that although highwaymen posed no overt challenge to social orthodoxy – they aspired to be known as ‘Gentlemen of the Road’ – they were often seen as anti-hero role models by the unruly working classes. He concludes that they were executed not only for their criminal acts, but in order to stamp out the threat of insubordinacy.1 (This paraphrase of the passage is acceptable as the wording and structure demonstrate the reader’s interpretation of the passage and do not follow the original too closely. The source of the ideas under discussion has been properly attributed in both textual and footnote references.)

B) Peter Linebaugh argues that highwaymen represented a powerful challenge to the mores of capitalist society and inspired the rebelliousness of London’s working class.1 (This is a brief summary of the argument with appropriate attribution.)

4)    Tips on how to avoid plagiarism

-    The first step when writing an essay is to draft a structure of the paper: What is your research topic, research question, your hypothesis and your claim?  This might not seem very relevant with respect to plagiarism but it helps you to think about your contribution to existing academic literature. Get familiar with the topic and do a lot of research so that you will find out what is missing in the academic discourse. Once you have discovered the gap and you are aware of it, it is more likely that your essay will become unique instead of simply repeating what others already explored which can easily lead to plagiarism.
-    When searching for sources make sure they are reliable and contain correct information. Do not use too many websites for academic papers; rather rely on books found in your library or e-journals and e-books that can be downloaded from an online library.
-    Once you have collected all your sources, try to organize yourself. Either take notes or use highlighters. Keep your sources together so that you will not get confused. If you want to use these sources later on you should always know where to find them again.

-    We distinguish between two different ways of quotation: indirect and direct quotation
-    An indirect quote means you take the idea of the original source and try to paraphrase it (put it in other words, rephrase it)
-    A direct quote means you take the exact sentence from the original source and put it into your paper. Here, you have to use quotation marks (‘ … ’) to highlight that this is not your own thought.
-    I would always recommend not putting too many direct quotes in your paper. It makes you look like you were not able to paraphrase the ideas of the author or did not understand them properly.
-    If you quote directly, try to incorporate it into the context – do not simply cite an author. Direct quotes should only reinforce your argumentation and not replace it. They should only be used when the wording of the original sentence is so specific and meaningful that you cannot rephrase the content properly.
-    In both cases, indirect and direct quotes, you must always put the source in brackets behind the sentence. Only if the reader is provided with the correct source you will not be accused of literary threat. The information about the source should contain the surname of the author(s), year, and – if given – page number. Example: ‘This made ASEAN a pivotal sector in the much larger multilateral initiatives that emerged, which were geared towards closer political and security co-operation, as well as deeper economic co-operation’ (Caballero-Anthony, 2005, p. 1).

-    There are also other ways to refer to a source which help varying your writing style.
-    Useful phrases are:

-    Before submitting your paper/essay, search for websites that check your documents for Plagiarism.
-    Yet, you should not rely too much on these websites as their databases often do not include many academic sources. Always read your paper carefully several times before you hand it in.
-    Reading it out loud also helps to identify sentences that might sound too sophisticated and need to be rephrased as they are too similar to the original source.
-    Although most universities have their own computer system to check documents against plagiarism, a lot of professors read over the papers again and again because the programs are not very advanced yet.